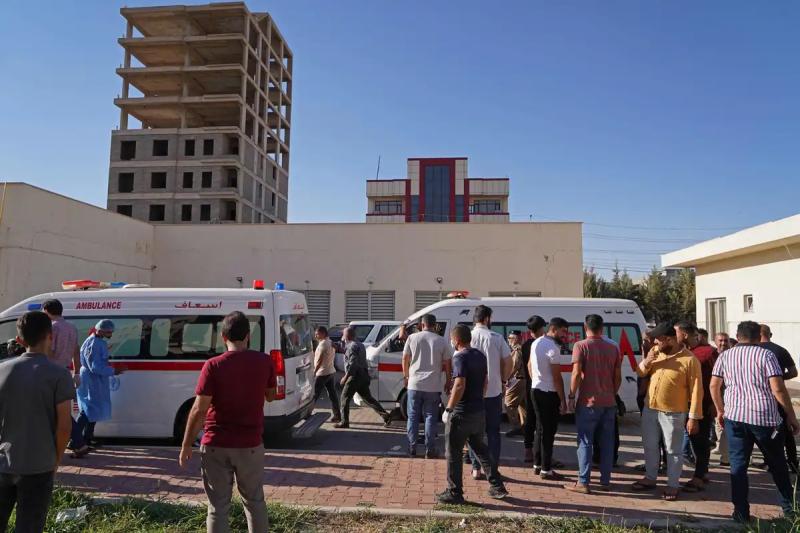 Nine civilians, including children, were killed and 23 injured on Wednesday in northern Iraq by artillery fire attributed to Turkey, prompting Baghdad to recall its charge d’affaires in Ankara and demand the withdrawal Turkish forces from its territory.

Iraqi Prime Minister Moustafa al-Kazimi adopted an unusually firm tone vis-à-vis his Turkish neighbor, condemning a “flagrant violation of its sovereignty” by “Turkish forces”, accused of having carried out strikes on the artillery on recreational gardens in the autonomous region of Kurdistan.

The victims of the shootings in Baghdad were mostly “Iraqi Arab tourists, mostly from central and southern Iraq”, Mouchir Bachir, the head of the Zakho district, bordering Turkey, told AFP.

This mountainous region of Kurdistan is very popular with residents of central and southern Iraq fleeing the scorching temperatures of summer.

A source within the Turkish Defense Ministry, however, assured AFP that it had “no information reporting or confirming artillery fire in this area”.

For its part, Turkish diplomacy considered that “these types of attacks” were perpetrated by “terrorist organizations”, calling on Iraq not to “make statements under the influence of terrorist propaganda”.

Ankara, which has had dozens of military bases for 25 years in Iraqi Kurdistan, launched a new military operation in mid-April against Turkish Kurdish insurgents from the Kurdistan Workers’ Party (PKK), classified as a “terrorist” group by Turkey. and its Western allies.

“Our children are dead”
In front of a hospital in Zakho, Hassan Tahsin Ali, with his head bandaged, tells AFP that he miraculously survived the deluge of fire that fell on the park and its stretches of water, where visitors were enjoying a moment of relaxation.

“We come from the province of Babylon (center)”, says the young man in a flat voice. “There were blind strikes on us, there were bodies on the water,” he adds. “Our young people are dead, our children are dead, who should we turn to? We only have God.”

The Foreign Ministry will “summon the Turkish ambassador to Iraq”, according to the decisions of a Ministerial National Security Council chaired by the Iraqi Prime Minister.

Meeting on Wednesday evening, the Council demands the withdrawal of the Turkish armed forces from all Iraqi territory. Just as he calls for “the recall of the Iraqi charge d’affaires to Ankara for consultations, and the cessation of procedures for sending a new ambassador to Turkey”, according to a press release.

Turkish military operations on Iraqi soil are complicating relations between the Iraqi central government and Ankara, one of Iraq’s top trading partners.

They are worth to the Turkish ambassador stationed in Baghdad to be regularly summoned to the Iraqi Ministry of Foreign Affairs. But Iraqi remonstrances are generally short-lived.

In the evening, despite a large police force, a few dozen people demonstrated in front of a Turkish visa issuing center in Kerbala (center), burning a Turkish flag, noted an AFP photographer.

In the capital Baghdad protesters gathered outside a visa issuing center affiliated with the embassy and one of the participants climbed onto the roof and lowered the Turkish flag above it, according to two sources security, the police letting it go to avoid any overflow.

“Permanent danger”
Erbil, the capital of Iraqi Kurdistan, has complicated relations with the PKK as its presence in the region hampers its vital trade relations with neighboring Turkey.

“The clashes between the Turkish forces and the PKK in the border areas have become a threat and a permanent danger to the lives of citizens,” the Kurdistan regional government denounced in a statement on Wednesday.

On July 17, an armed drone – Turkish according to local Iraqi officials – targeted a car west of the city of Mosul (north), capital of the northern province of Nineveh, bordering Kurdistan.

The attack killed the driver and his four passengers identified by Kurdistan’s security services as PKK fighters.

A month earlier, four PKK “fighters” had been killed in Iraqi Kurdistan in an attack carried out by “Turkish army drones”, according to the authorities of this autonomous region.