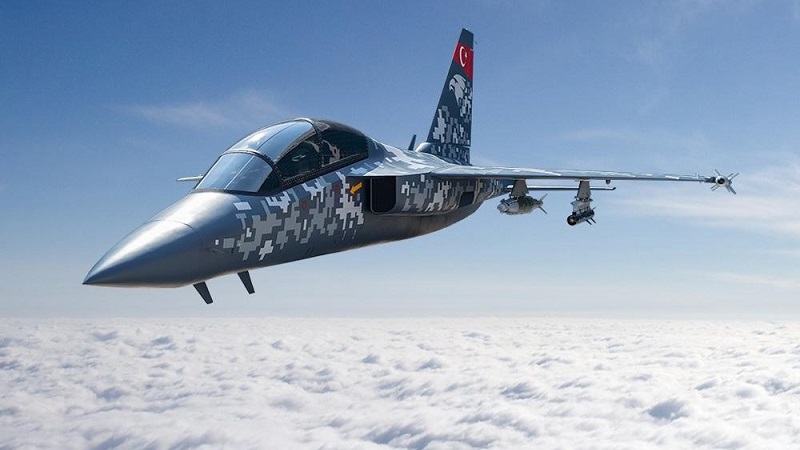 Turkish Aerospace Industries will unveil the Hürjet prototype at the Farnborough Airshow in the UK. This aircraft could replace the Turkish Air Force’s Northrop T-38 Talon and F-16C Falcon.
For the Farnborough air show in the United Kingdom, Turkey does not intend to make up the numbers. After the presentation of a model in 2018 during this show, Tusas (Turkish Aerospace Industries) should this time unveil the prototype of the Hürjet, its light combat and training aircraft.

This single engine in single or two-seater versions is a supersonic. It will be able to reach a maximum speed of Mach 1.2 and fly at a maximum altitude of 45,000 feet According to Air&Cosmos, a naval version capable of taking off from a flight deck is even under study. The 5th generation device will be equipped with a latest generation computer system, a powerful radar system and air and ground communication devices presented as inviolable.

This aircraft could take over from the aging fleet of Turkish air force consisting of Northrop T-38 Talon and F-16C Falcon. The latter cannot be modernized according to a decision by Washington linked to an arms contract with Russia.

“Turkey needs this type of aircraft. It flies faster than sound and more economical than an F-16. It has its place in the world market. It will fly in 2023,” said Temel Kotil, director General of Tusas.

By removing the Turks from the F-35 program, the Americans unwittingly accelerated the Hürjet program. Earlier this year, he received support from President Recep Tayyip Erdogan with an order for the Turkish Air Force to deliver. The first could be in 2025, according to the Defense Turk site.

Tusas also counts on international markets. The manufacturer responded to Malaysia’s call for tenders for 18 aircraft which will mainly be built locally. Facing him, China, Russia, South Korea and Italy. The amount of this contract would be close to a billion dollars.

This project launched in 2017 initially aimed to create a training device for pilots. Since Turkey was removed from the program by the United States, Ankara has decided to modify the role of the Hürjet by making it a light and fast combat aircraft. Moreover, its name (“Hür” means “free”) expresses this desire for aeronautical independence vis-à-vis the United States, even NATO. Its first flight is scheduled for 2023 for the centenary of the Republic of Turkey.