In Turkey: Discover the treasures of Cappadocia 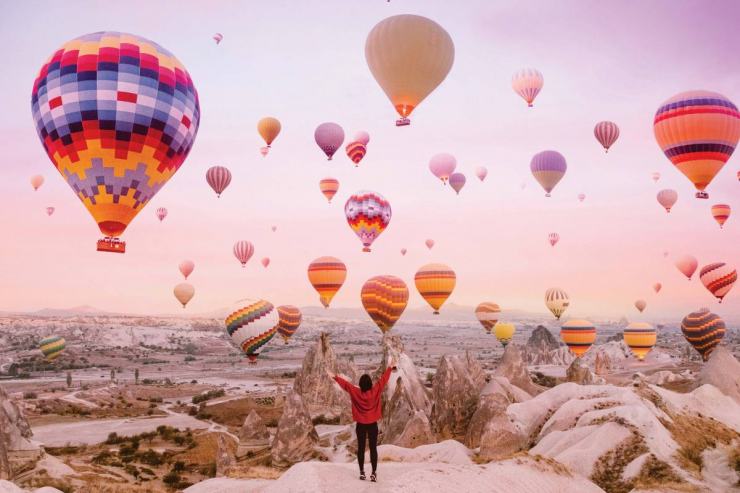 In the heart of Anatolia, in Turkey, between the Black and Mediterranean seas, Cappadocia and its red-ocher lands conceal priceless vestiges and natural jewels: rock sites, underground cities and other curiosities deserve to be told and photographed…

“The Love Valley” or “Valley of Love“, this is the other known name of this region with surprising landscapes, classified by UNESCO, sculpted by the hand of man, volcanic activity and erosion. Why ?

Because the sandy soil is home to a multitude of unusual rocky chimneys surmounted by a hat, inevitably reminiscent of the erect male sex… At sunrise or sunset, flying over these reliefs in a hot air balloon ensures wonder!

But that is not the only attraction! Among these imposing canyons, it is also necessary to visit, in a singular light – beige with red reflections – some of the main troglodyte villages: that of Uçhisar, dominated by the Kale and still inhabited, that of Ürgüp, that the market ( on Saturday), the hammams and craftsmen make you very lively, without forgetting to go through the ancient Roman city of Sobesos and the town of Mustafapasa.

Finally, you have to go to the open-air museums of Goreme, Zelve and Avanos, and discover their incredible monastic complexes (churches, chapels, dwellings, mills, etc.) dating from around the 17th century.

Cappadocia : On the side of the Ihlara Valley…
First of all, the ramparts of the caravanserai of Sahiran, built in the 13th century and recently restored, a tribute to Islamic architecture, are worth a detour.

But it is in the underground city of Derinkuyu, meaning “Deep well”, the largest in the country, that it is recommended to stop first: its many mazes would have been dug in the 7th century before our era, would have simultaneously housed up to 20,000 shepherds and their flocks, and served as an asylum for Greek and Orthodox Christians, respectively persecuted by the Romans, the Umayyads, the Abbasids and the Turkish nationalists… Less popular but organized on the same principle: the town of Kaymakli .